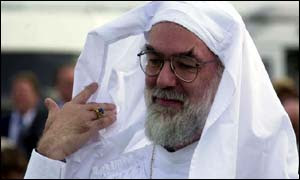 A few days ago The NVCM brought you the news that an Episcopal priest had taken up the Druid name OakWyse, disavowed his priestly vows and joined the Druids. Further, his wife - also an Episcopal priest - was the subject of some controversy because she continued to serve actively as a parish priest in the ECUSA despite her occasional use of Druid elements in services.
It seems that, with respect to Druids, she at least, is in line with the practice of the leader of the Anglican world wide communion:

+The new Archbishop of Canterbury has been inducted as a druid in a centuries-old Celtic ceremony.
+Dr Rowan Williams, the current Archbishop of Wales, said that he had been "saddened" by the misrepresentations about the ceremony, which sparked concern about pagan links. "Some people have reached the wrong conclusion about the ceremony," he said. "If people had actually looked at the words of the hymns and text used they would have seen a very Christian service."

What is the Gorsedd of Bards?
Created in 1792 as celebration of Welsh and Celtic heritage
Gorsedd is Welsh for high seat
Rituals look back to era when Celtic druids - religious professionals - led society
Compared to English honours system
Currently 1,300 members
Dr Williams became a member of the highest of the three orders of the Gorsedd of Bards - a 1,300-strong circle of Wales' key cultural contributors - in a ceremony at this year's National Eisteddfod celebration of Welsh culture in St Davids, Pembrokeshire.

+The ceremony, which took more than an hour, started with a procession from the main Eisteddfod Pavilion to a circle of stones on the edge of the site. Dr Williams, 52, wore a long white cloak without any headdress as he arrived at the back of the procession.

The actual ceremony started with a trumpet fanfare and the partial sheathing and unsheathing of a 6ft 6ins sword. Hymns and poems were said in Welsh before around 50 people were made druids.

What will other people think he is doing?

Dr Williams was given the Bardic name of ap Aneuri, which he chose partly after a sixth century Welsh poet and partly after Aneurin Bevan, one of his personal heroes and the architect of the National Health Service. [continue reading]

Sometimes, Dr. Williams, leadership means avoiding needless controversy for the great good of the organization (r.e., the Kingdom of God). You will have to admit, I think, you did this primarily for your own selfish reasons. (Take a tip from the example of Larry Summers, president of Harvard.)

Sidebar: Regarding the gay bishop row. Church politics makes strange bedfellows. I hope the conservative in the Episcopal Church know who they are allied with. It seems clear theirs is a temporary marriage of convenience, and not to death do us part.

My thanks go to reader BF for digging up this blast from the past.
Posted by John B. Chilton at Sunday, April 17, 2005

What would Larry Summers' reasons be?

Larry Summers enjoys controversy which is why he accepted the invitation to speak provocatively at a conference on women in science. He did not take into account the consequences for Harvard. As Harvard's leader, he should have. (See Posner-Becker blog.)